History of the House

Nearly 150 years of history of our house and the land on which it sits. All the pdf documents will download when you click on the links. 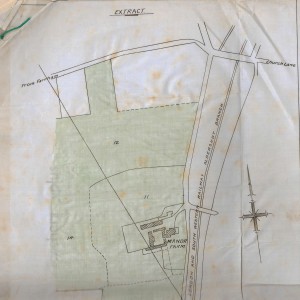 Frederick Eggar sells a chunk of land to James Cholmeley Russell. This may have been to pay off gambling debts.
See the Abstract of the Title for details of all 19th Century activities.

Part of the land brought by Susan Sumpster plus a little bit of Manor Farm.

PDF of the Conveyance

Mortgage taken out by Susan and Bertha Sumpster to build Bridge House.

PDF of the Mortgage Document

On the day of the census Arthur Urban Sumpster, Edgar William Sumpster and Rose Ellis (a maid) were living here. There is no mention of Susan because she was staying at a boarding house with Bertha in Southsea that day.

Indenture between Edward Bull and Richard William Mason (the Trustees) and Susan Sumpster (the Purchaser) and James Chomley Russell and Amelia Gully to buy a strip of land to the north.

PDF of the Indenture

6 people in the house on 24 April: Richard Garrett and his wife and son, a boarder and two visitors.

Arthur Sumpster dies. He had moved up the hill to 29 Grosvenor Road after Bridge House was sold in 1921.

PDF of the Conveyance

Request to convert into 5 flats rejected

Request to convert the house into 6 flats rejected:

Request to convert into 4 flat accepted

We buy the freehold